Feria de Abril was something that everyone had been talking about since I started my internship experience here in Sevilla. “During Feria this... In the Feria that..” Actually they started to build up the Feria area for over two months before the actual happening! So I figured it’s probably quite a big party and when you think about it, party that lasts for a week is probably pretty big!

Feria de Abril is a weeklong festival, held in April as the name tells. It’s about eating and drinking good, wearing your best clothes: all the men wear suits and ties and all the women wear usually the flamenco dress. Also, EVERYBODY in the city participates the festival! For instance, if you walk in the city, everyone is dressed up! It’s unbelievable!

We decided to participate the party with the personnel from the company where I have my student placement the next day. Our company gave us interns shorter working days so that we could go to the Feria. On Wednesday, we interns headed out to change nice clothes and went to have a work lunch in the festival. It was really interesting and nice to see all that. The place was full of people, horses and tents.

Yes, tents. People can rent a tent for themselves for the week. Only the cost is at least 2000 euros for one! Not something that student who is doing internship can afford! Usually you can’t enter a tent, if you are not invited and that makes the tents really desirable for people to get. For those people, who don’t have access to any tent, there are public tents (where to buy food and drinks). Only the prize might get pretty high!

Also, there are a LOT of horses around. All the people bring their own horses from the country side and ride them in the festival. You can even buy a horse ride for yourself – if you have the money, because it costs 200 euros for one hour - another thing that interns probably cannot afford!

In the night time, the Feria area is lit by over 300,000 light bulbs. Actually the whole Feria area consumes as much energy as a city of 50,000 people. In addition to the tent area, there is an amusement park in the area! All this combined, lasting for a week, it is a big party!

I'm working, all week long,
I dream the days away,
I wanna... sing my song
so let the music play
I have to get my fix, and fly tonight
and when the clock strikes 6, on Fri-day Night
I need to blow it all away

I Can't wait.. for the weekend to begin...
Michael Gray - The Weekend

My second week here in Sevilla was still pretty nice! First of all I got a better hang of my work assignments and started to realize what it is all about. Secondly I got to finally know the city a little better after this tourist-like city tour. Yes, I know it’s already my second week and I should already know the place, but you see: working every day with 9 to 5 basis and travelling to work altogether for 1,5 hours equals not much time or energy to be a tourist. 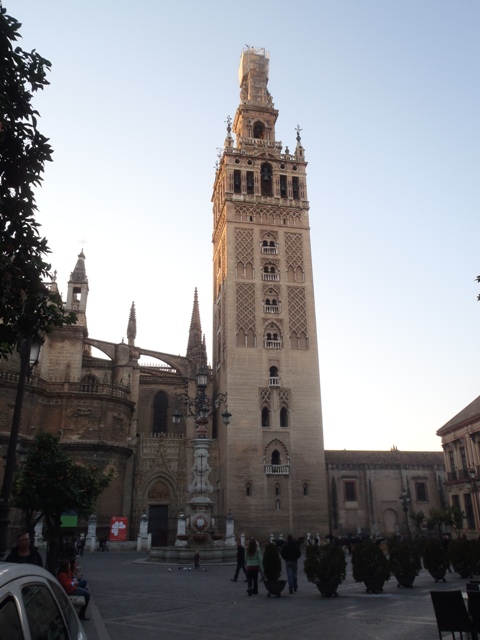 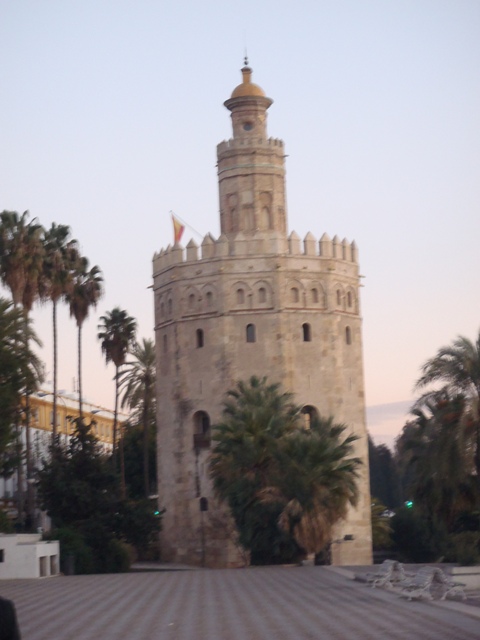 Then, on Friday, I was just walking in this Plaza del Duque trying to find myself roller skates and suddenly somebody shouts my name from the behind! I turn around and see this Austrian girl who I met the week before at Malaga! I mean, what on earth? What are the odds? :D I had promised her to show around the city and so I did! We went together on this city tour that my fellow intern was arranging the same evening. At the tour we got to see all the amazing places like the Catedral de Santa María de la Sede, Metropol Parasol (aka Las Zetas de la Encarnacíón),  Plaza de Toros de la Real Maestranza de Caballería de Sevilla, Parque de María Luisa and finally Plaza de España! 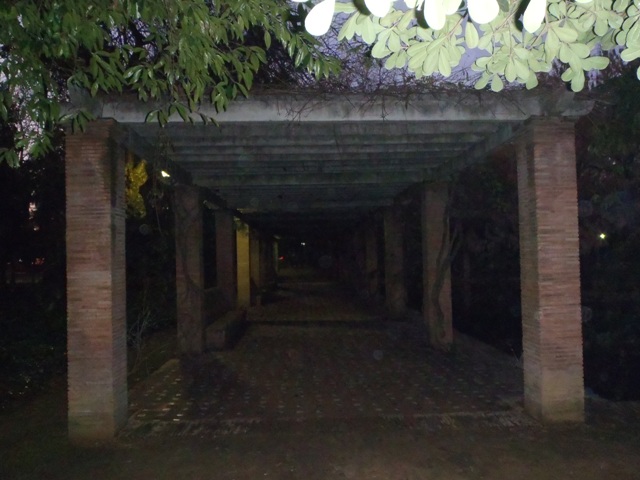 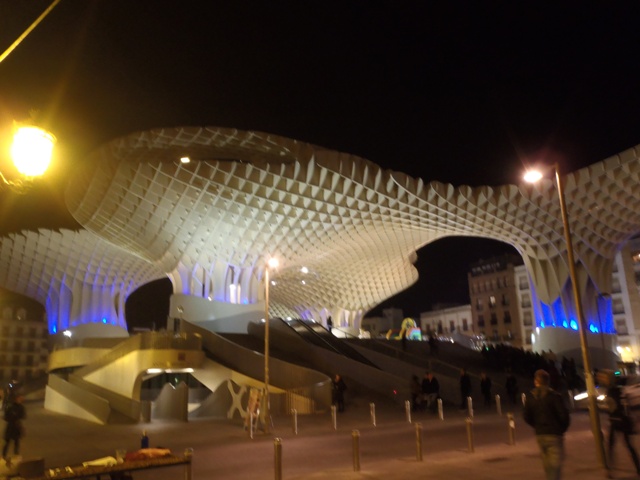 The next day, on Saturday, we decided to go out to have a drink or two. Some other people I got to know earlier had also the same idea and so we had a little party! In the end there were Finnish interns, couple of Dutch interns, couple of Slovenians (on vacation) and an Austrian traveller! The night was great and we had some great time together exploring the night life in Sevilla. During the first two weeks I’ve met so many new people that I’m not even sure if I can remember them all! 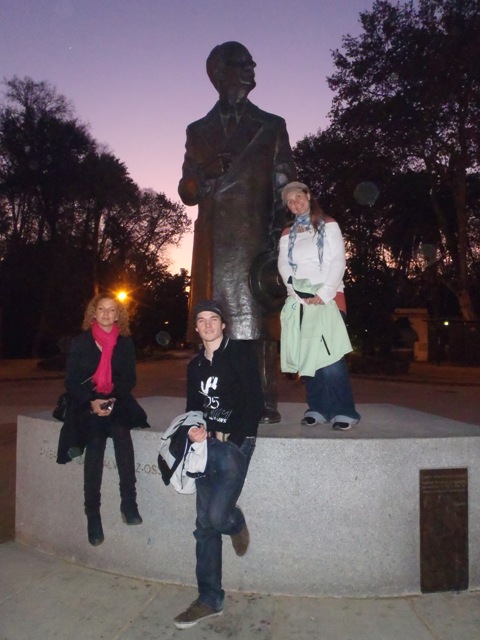 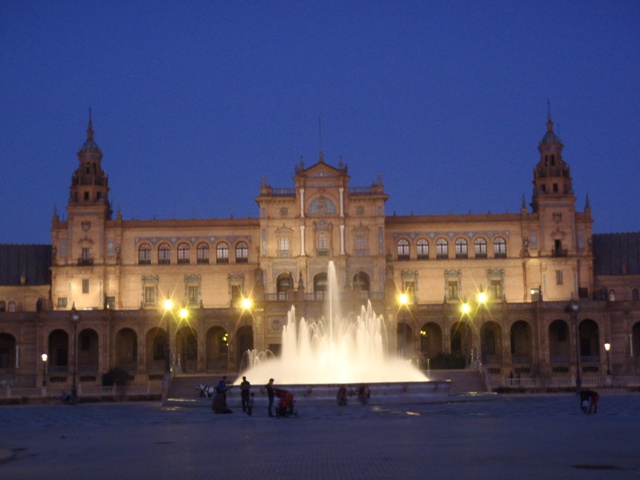 Alright I guess it’s time for me to tell you guys a little bit about my first few days here. So as you know, I departed Spain on Monday the 9th at 10 pm in the evening (or the night). The first work day was already the next day. So I had a very brief introduction to the apartment I would live in and then get straight to bed. The next morning we left to work at 8 am with another intern working in there. 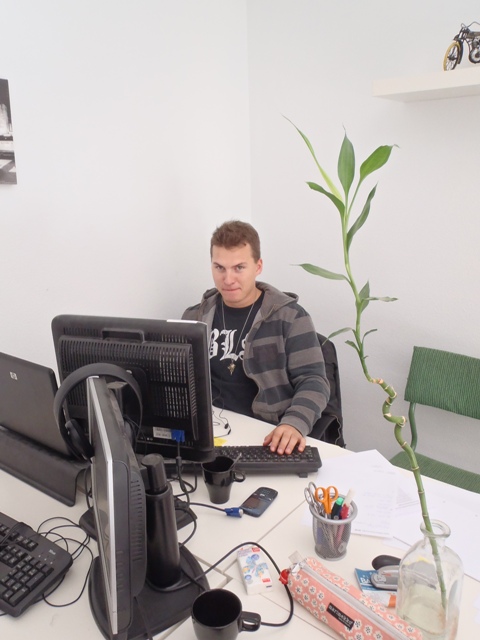 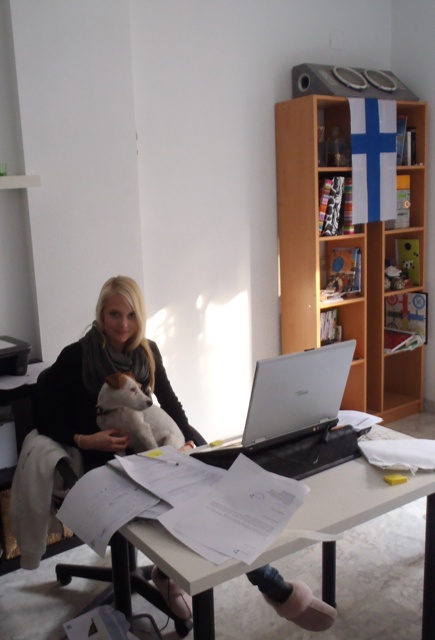 Another hard day at the office?

The first few days at work were mostly just about observing and trying to learn what was going on there. The office is actually very cozy, although it is quite cold inside in there as well. But altogether it’s a really nice place to work! The company owners are also very nice and friendly. It’s especially great that they are quite young so it’s easy to be on the "same level" with them (when it comes to humour for instance)! 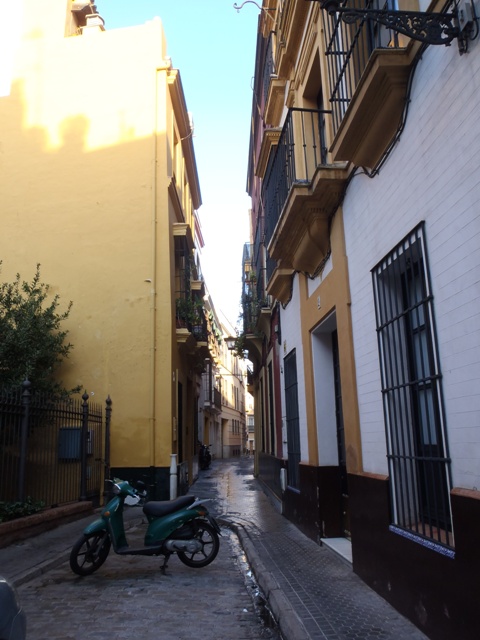 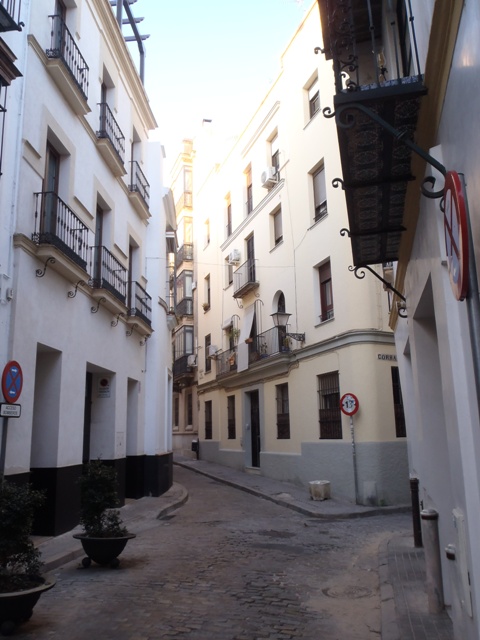 There are alleys like these all around the city centre!

The second night, on Tuesday, we went out for a little clubbing on “Super Tuesday” –student party. It was ok, but not great (wonder if I’m starting to get old?) so I was a little bit disappointed… But it was still nice to go out with some new people and meet some more people! In the other hand, it wasn’t nice when I had to wake up for work at 8 am again the next morning. You can imagine it was quite difficult, as I was awake and had been drinking until 3:30 am in the morning! :D After a day at work with quite bad hangover I decided that I’d skip the Super Tuesdays in the future… And that's all I have to say about Wednesday! 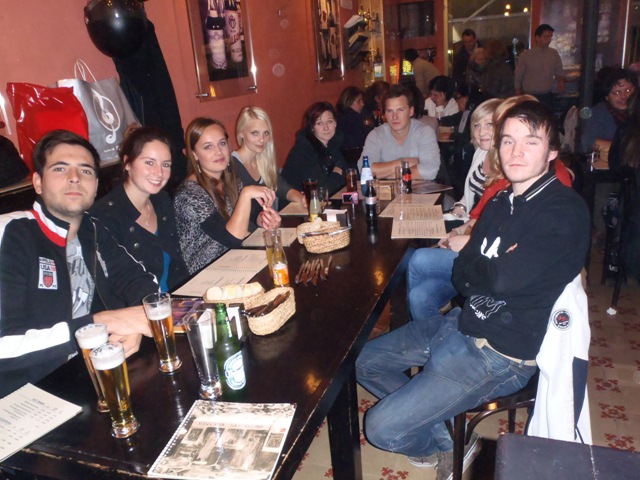 Interns having some afterwork!

On Thursday we went out to have dinner with a mixture of Dutch people, Finnish people and a Spaniard. We were having this dinner together because one the Dutch interns was having a kind of like going-away –party. I would have the next day free so I thought it would be best to get a good sleep after a hard week. On Friday I slept until 12 am and after waking up, I decided to go for a walk around the city centre. The city of Sevilla, it is so magnificent… There’s nothing like this in Finland! It’s different, it's old and still it's clean and fresh. Sevilla is romantic! 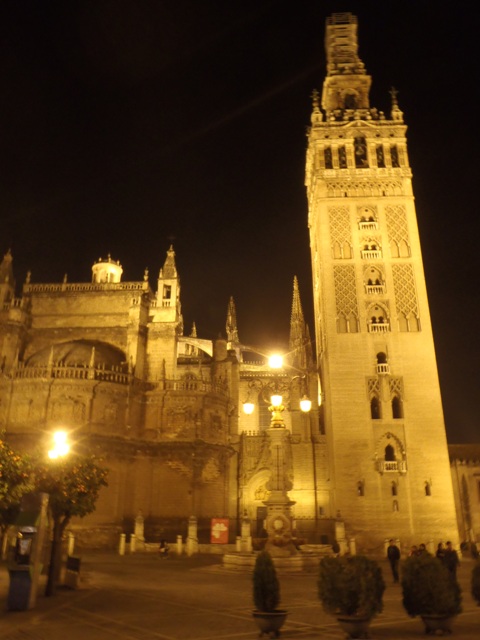 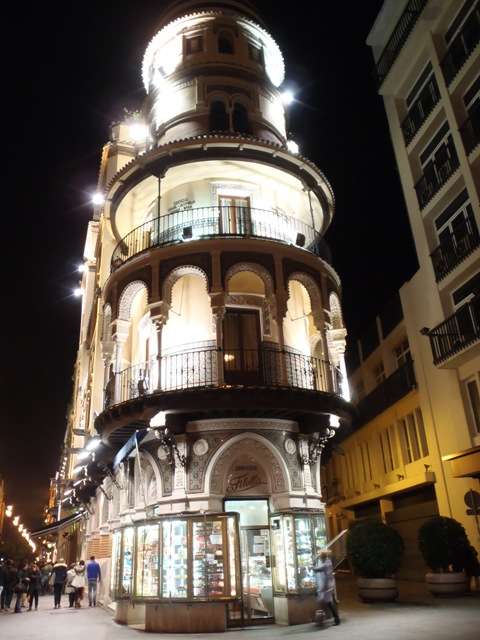 Sevilla's got some style, baby! ;)

Print
Today it started, finally! The moment and the journey I’ve been waiting for and been thrilled about for 5 months. Today I stepped onto the train to Helsinki at Joensuu train station and kissed goodbye to my dear hometown for the next 5 to 6 months. It’s the day when I’m flying off to Sevilla for the next 5 months. At the moment I’m sitting at a lunch bar in London Stanstedt airport and I’m thrilled! These last few days I’ve visited good friends all over southern Finland for the last time.
Why I'm so anxious about this moment is because for the last five months I’ve done tons of preparations and arranged my life in every aspect so that this could be possible. And I’m now finally starting my journey to Spain. My name’s Aaron Ilmakari and I am 23-year-old BBA student from Joensuu, Eastern Finland. I study in North-Karelia University of applied sciences and am majoring in marketing and entrepreneurship. Now I’m off to complete my practical training as a marketing assistant in a small international office in Sevilla, Spain. Now how cool is that? ;) 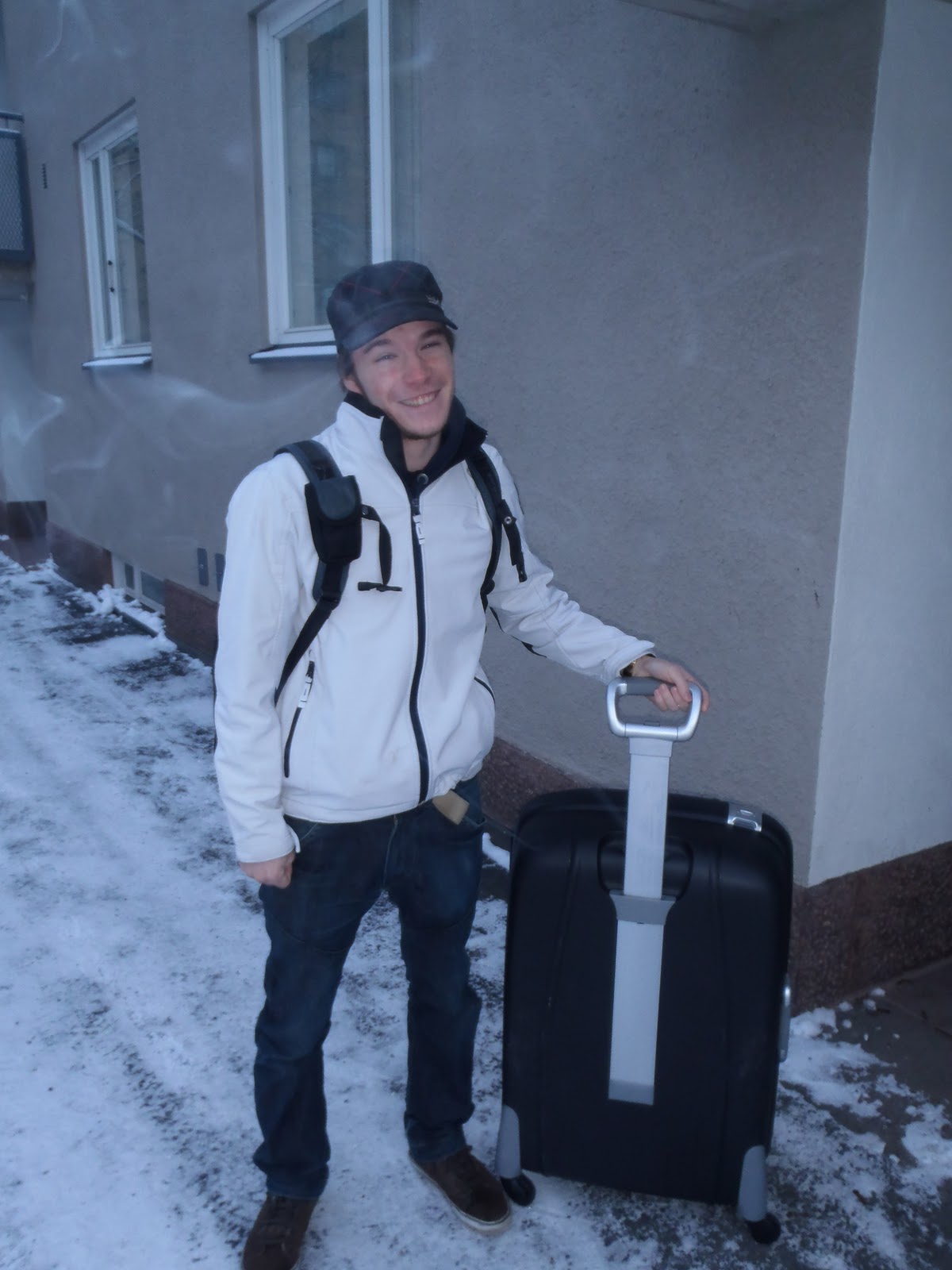 The moment of truth...

Feelings that are going through my head right now are most controversial. In the other hand I’m thrilled as hell because I get to see a whole new country, new culture and a whole bunch of new people. Also, I’ll surely get some very useful professional knowledge and experience. But in the other hand I’m also a little bit afraid or should I say reserved about the fact that I’m leaving virtually everything behind me and from now on I'm on my own and nearly everything will be new to me. But I think it's just healthy: people do tend to get stressed about lesser things, right? Well, maybe I’m now getting a little too serious about all this, I am determined that I will not stress about it! This journey, it’s not about performing; it’s about having the time of my life!

Then, during the flight it really struck my consciousness: This is really it. There's no coming back! I was so thrilled. I was enlightened. The feeling was just incredible: anxious, relieved, happy, sad, scared and enthusiastic all at the same time! Plus, already in London it was so “hot” (+11 celcius compared to -14 in Tampere) that I was sweating like a pig :D So yes, if someone asks me should he/she go to an exchange to another country, I’d say definitely yes only based on this feeling you get even before you reach your destination! It’s crazy!
Standing there alone, the ship is waiting.
All systems are go. Are you sure?
Control is not convinced, but the computer,
has the evidence: No need to abort.
The countdown starts...